1. In short: The particle “no” (の) is a possessive marker

Example 1:  これはのペンケースです。Kore wa watashi no pen-keesu desu. (This is my pen case.)

2. A bit more on the particle “no” (の): Its other meanings, shortened expression, and on the repetition of the [Noun + “no”] block

(1) Other meanings of the particle “no”

You can use “no” to connect nouns with different relationships than the possessive or “belonging to…”:

Ex. 4:  これはヤギのチーズです。Kore wa yagi no chiizu desu. (This is cheese made from goat’s milk.)

(2) Shortened expression with the particle “no”

We often omit the noun after “no” when the listener knows what we are talking about from the context.

Ex. 5: これはのですか？Kore wa dare no desu ka? (Whose is this?) [We omit the word for the object such as “kasa (umbrella)” after “dare no (whose)” if we are showing the umbrella to you.]

Ex. 7: これはのおにりののスカーフです。Kore wa haha no o-ki-ni-iri no midori no sukaahu desu. (This is my mom’s favorite green scarf.)

Ex. 8: これはのおにりののスカーフのです。Kore wa haha no o-ki-ni iri no midori no sukaahu no shashin desu. (This is the photo of my mom’s favorite green scarf.) [It might sound too many “no” in the sentence and perhaps you would be out of breath, although you would get the meaning across.]

3. Bonus: The use of the particle “no” (の) for apposition and as the subject marker

To explain something, we sometimes offer two different words to refer to it, such as “This is my sister Erika”. Both of the words “My sister” and “Erika” mean the same person. In Japanese, we use “no” to connect them.

Ex. 9: これはのえりかです。Kore wa imooto no Erika desu. (This is my sister Erika.)

(2) “no” can be a subject marker in a subordinate clause

You may see “no” after the subject in a subordinate clause, particularly when it modifies a noun. This “no” shows the subject in the clause. The meanings of Ex. 11 and 12 are exactly the same.

Ex. 11: これはミラーさんのったケーキです。Kore wa Miraa-san no tsukutta keeki desu. (This is cake that Mr. Miller made.) 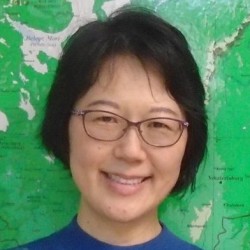 We are in “Grammar” Category